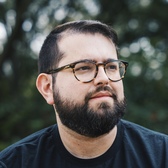 Stay up to date, be part of a community and show your support.

Apple did not disappoint during yesterday's event! After small updates to iPhone SE and iPad Air, App